How to assess the 32 and 64 bit versions of Microsoft® Access and to choose between them for any new project or database upgrade.

A Bit of History

Before September 2018, the 32 bit version was recommended by Microsoft as the default installation of Access, alongside the other 32 bit programs of Office. Nowadays the 64 bit version is their recommended default, as it is for all their Microsoft 365 programs.

Unless you instruct your IT supplier otherwise, any new computers you order are likely to come with 64 bit Access, as suppliers follow Microsoft's recommendations for Office 365.

This presents an issue for the majority of DMW’s clients as new computers are introduced to supplement, rather than replace, their old ones. The old computers have 32 bit applications installed; the new ones, 64 bit. Does this affect the running of databases? Certainly, yes it did. I try to explain why later in this article.

So why not specify 32 bit Office 365 for all new computers? Sticking with the devil you know may save a lot of hassle because you know that everything you’re using will work on those new computers.

But the devil you don’t know is when 32 bit Office might lose support (no sign of that yet as far as I can make out) and you’re left with applications, including databases, that break down under a 64 bit regime.

So why not move all existing computers to 64 bit, or replace them? In a one-word answer: cost.

There’s cost in licencing under Microsfot 365; in moving any workstation from Windows 32 bit to Windows 64 bit; in replacing workstations that don’t have the hardware to run 64 bit applications.

One reason why you might be obliged to go for 64 bit Access is because your database has a SQL Server back end and tables in that back end have fields of the bigint data type. 64 bit versions of Access, beginning with version 2007, are equipped with a Larger Number data type, which provides the required compatibility.

These are some considerations on upgrading a computer from 32 to 64 bit Access:

Views expressed on the web about performance gains ascribed purely to upgrading 32 bit applications to 64 bit are divided.

It seems generally agreed that performance benefits from a 64 bit platform accrue to extensive Excel spreadsheets performing heavy duty calculations, to large-scale master plans in Microsoft Project and to long and complex documents in Microsoft Word.

For Access databases, opinions are mixed. The favourite seems to be that you won’t notice much, if any, increase in responsiveness in taking your database to 64 bit.

My experiences are these:

For example, recently I was engaged to convert a client’s Access 97 database. Its tables and relational structure did not follow the accepted standards for a relational database. At the time of my involvement, the client didn’t want any re-engineering, so the “upgrade” was little more than a straight, unedited translation. The effect on one report that completed within 10 seconds under Access 97 was that it took over two minutes under Access 2016. 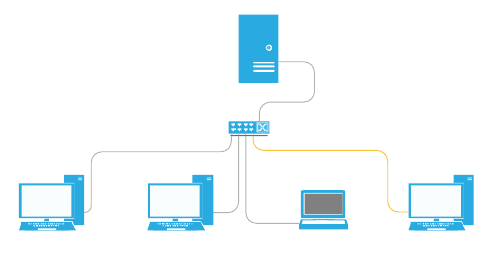 Add to the minimum and you might notice a difference in database performance depending on the design of the database and on whether you open other applications — email and spreadsheeta for example — at the same time.

I’m very pleased at the results of Computer Troubleshooters replacing a high-performance (but failing) hard disk with a SSD on one of my PC work-horses. All the programs of Microsoft 365, and all my databases, run noticeably faster than they used to.

“I have a question,

I recently took delivery of my new Dell, which came with the 32bit version of Windows 7, however the PC is capable of running at 64bit.

If I install Windows 7 32bit twice would that make it 64bit?

Any help would be greatly appreciated.”